Well, it seems the Dressing Gown costume will have to wait at least another day, if not longer, because I need more duct tape for a mannequin, because I want this sucker to be STRONG and not collapse with the beating I am certain it will get. I also have some plaster laying around the house, I wonder if that would work to make a more durable mannequin? After the removal of the tape, of course – I’m already planning on compressing a bit to make up for the bulk of the shirt and tape, I’m not about to go standing in one spot with plaster on me all day!

In the meantime, I’ve been researching the heck out of my next costume. This one I want for Christmas, because it’s just so darn cozy-looking – pretty much my style for winter. The problem is, even though the movie has been out for almost a year now, pretty much no one has made costumes from this movie, which I am just aghast at – I guess it shows me how hardcore of a nerd/crafter I am. I haven’t even seen the movie yet! So, the fact that no one has gotten down and dirty (literally) with these costumes means that I have the immense joy of doing ALL of the initial backbreaking, hair-pulling, teeth-gnashing research. Thankfully, there are some folks who managed to take pictures at different angles at exhibits, which helps so very much. But that’s about as far as everyone else’s research goes. I found one other person who was looking into making this outfit some time ago for a friend to match his own.

I’ve been researching for 24 hours straight.

…With some breaks to eat and such, of course. Which reminds me, I really should put another pot of coffee (with cinnamon!) on soon…

Ahem. back on topic.

“Miyu, what is this awesome movie and costume that requires so much research?” you may ask. Well, lovelies, I shan’t keep you waiting any longer!

WARNING: LOTS OF PICS AND TEXT BEHIND THE JUMP!

Honestly, I can understand why there are so few people replicating costumes from this movie. Everything I’ve seen has been 100% mind-blowingly amazing and revolutionary (harhar, unintentional pun)… And yet, at the same time, it is soul-crushingly depressing. The movie is so much more in-your-face with the conditions these poor wretched people must deal with than the theatre version (obviously, they are two totally different mediums).

My favorite part about this movie (even though I haven’t seen it!) is the singing. OMG the singing. That’s right, even more than the costumes! The sheer power of having every single cast member sing live to the camera, no pre-recorded tracks and vocal tweaking! Can you imagine being the crew shooting the crowd scenes – with hundreds of people singing all at once?!? I don’t care if people didn’t sing it the way it’s traditionally sung.  Nope, I haven’t seen a stage production either, but I did obsessively listen to my Math teacher’s copy of the Broadway soundtrack – OCR, I believe… Waaaaay back in high school almost 10 years ago. So, I’m not coming from a place of total ignorance and being all “OMG YOU GUIZE it’s the moovee so it must automatically be the best EVUR!!!11!1!!”. No, I quite enjoy the raw emotion all the actors portray – yes, even Russel Crowe. He played a different version of Javert is all… The very straight-laced, sees-in-black-and-white version.

Now I bet you’re wondering which costume I have my eye on, hmm? Well, it’s this little beauty:

I CAN’T RESIST. The second I saw that skirt, I was hooked. The above photo is from the Annie Leibovitz photoshoot – and can I just say how perfect her styling and photographing is (as always)? I especially love the way the hem of the underskirt peeks out, showing a glimpse of the fabric so we don’t have to wonder what the underskirt looks like 🙂

There seems to be multiple versions of this skirt – which makes sense, I’d love to have a few different quilt skirts for winter! So far, I think I’ve spotted three separate skirts (still, without watching the movie yet) which all have similarities: some of the same fabrics in different proportions, and always that stripy bit with the flowers right on the front, like a zipper fly almost. I have to wonder if that’s the opening, since the back looks like it would be quite bulky and fiddly to work with (which I’ll show you in a minute).

A still from the movie (during “Master of the House”, I believe?):

Note that this skirt not only is lacking the large black/dark/whatever borders, but it also looks a bit more dingy. I think the photoshoot skirt is her “nice”skirt. I’m going with the photoshoot version because I like the greater contrast… although some of those pieces look kind of wonky at the bottom. I’m hoping that my n00b quilting skills (or lack thereof) will make it come out wonky like that without trying. I can hope, can’t I?

I was wondering how in the heck a big rectangle quilt would sit level over a bum – exactly what I was hoping! The waistband seems to come to a point in the back! (I’ve never been to school for design, don’t get mad if I don’t know proper terms) This means that instead of my bum raising the back hem off the ground like it does with straight skirts, having that point there will drape the skirt further down, making it more level. Bum issues solved!

Ok, so the quilt pattern used is Log Cabin. Now, I was boggled when I went to look this pattern up, and realized just how many variations of Log Cabin there are! So I took a few closer looks at the skirt blocks in both of these versions (I don’t have a very good picture of the third version I found yet). It uses one, maybe two types of Log Cabin layout.

Here’s the one I’m almost certain is the one used:

Of course, the colours are different. The vast majority of the centers, if not all of them, are black/dark.  There’s lots of crazy colours and patterns in there. Four of these Log Cabin blocks are joined together, then bordered with that patterned black to make larger blocks. Those blocks are then pieced together into a large quilt, which is then gathered into a very durable waistband. I’m fairly certain that the little stripey flowery bit in front is the opening/”fly”… Go take a look at the second picture of Madame Thenardier I posted… If you can enlarge it (download it and view it), you’ll notice that that stripe seems to hang much differently than the others surrounding it. It kind of pokes out a little bit, as if it’s stiffer from having fasteners there or some such. Also, that stripe only goes down to about where you’d leave the “fly” in the skirt if it was on the back.

So, I ransacked all the old clothes/bedsheets/scraps I had laying around, and found some perfect fabrics for this skirt (and the underskirt), as well as for the bodice. One of my most treasured scraps – an orange fabric napkin I’ve been carrying around since I received it at Burning Man ’09 – is going to become immortalized in my skirt… Which makes me super-happy, because YAY orange, and also now I can stop worrying about misplacing a scrap of fabric the size of my hand, haha! Plus, I get to show it off in a much nicer way than “…Yeah, here’s my fabric-scrap napkin with a stick figure dude drawn in fading Sharpie!”

On to other costume parts other than the skirt(s):

I finally found a few super-size stills with enough clarity to  confirm some of my thoughts on these pieces:

First of all: The one other person who I had heard was working on this costume had a question: Is the embroidery done straight on the bodice, or another piece of fabric? After finding this photo, I can tell you that on the bodice it is most likely done on another fabric. You can see the edges, just past the edge of the embroidery, poking away from the main bodice fabric.

The chemise looks to be blackwork done directly on the fabric. I have a shift that is rather large on me (which I also procured at Burning Man – Thank you, Black Rock Boutique!) which has elastic at neckline and hem. Obviously, this will be remedied – the cuffs will be hand-smocked, and the neckline will get squared off and less droopy.

THOSE KNITS!!! This is the real reason I looked so hard for a high-res photo! The shawl seems to be a simple garter stitch triangle shawl, though I think it looks to be a center-growth triangle (which you start at the middle top, not the bottom point, and increase outwards) versus a simple point-up triangle. There’s definitely some wool in that yarn blend, I can see the lovely fiber halo on it. I’m trying to decide whether I think it’s a sport, DK, or worsted weight yarn, though…

The fingerless mitts are tricky. In lower-rez photos, they look like either a twisted rib or plain rib, in either darkish grey or messy purple yarn (depending on the shot). A lovely lady (heehee) on Ravelry posted a pattern for Madame Thénardier’s Pauper Gloves, but I just kind of felt like a tight twisted rib was the wrong stitch for this glove. Oh, how I wish I could have seen it in theatres! I could have seen all those lovely costumes on the silver screen, so huge I could pick out any pattern!

Well, in the past few hours, I managed to come across this behind-the-scenes photo:

I thought that texture looked familiar… It reminds me of all the Victorian knitting patterns and examples I’ve been reading through lately. What it really looks like, to me, is brioche stitch. What do you think? I may have to play around with the sticks and needles to figure out my own pattern. But ooh, look at those colours up there in the image where she’s holding Cosette! I have light grey wool; perhaps I should attempt to over-dye my project wen it’s finished. The entire costume is going to get weathered and distressed anyways, so I might as well, right?

…Also, through that loose stitch, you can see she’s wearing a bracelet under there as well, if you want to get extremely obsessive with your costuming! And isn’t that cuff just droolworthy? 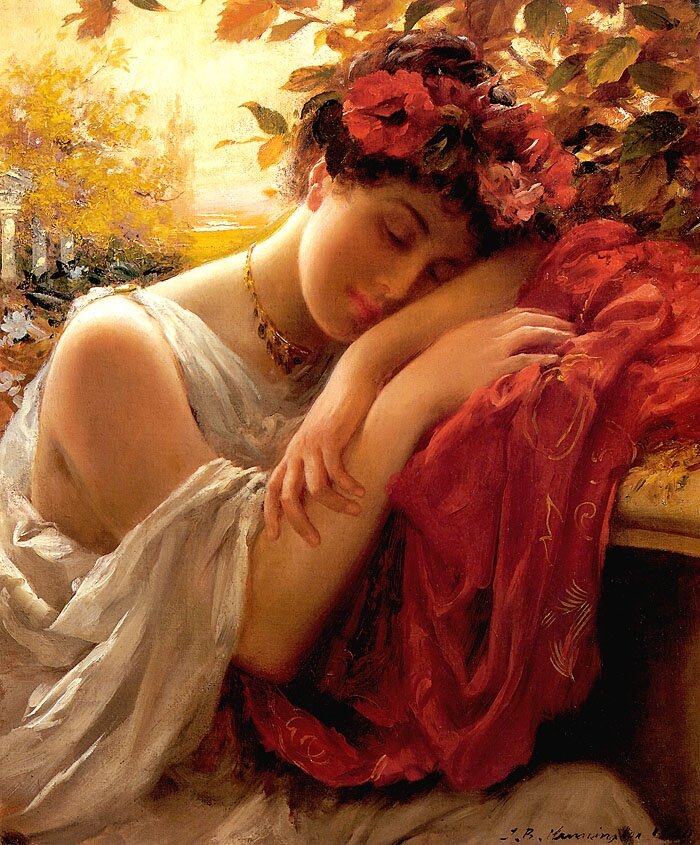 Visit Historic Beauty, my blog about historical and natural health and beauty!